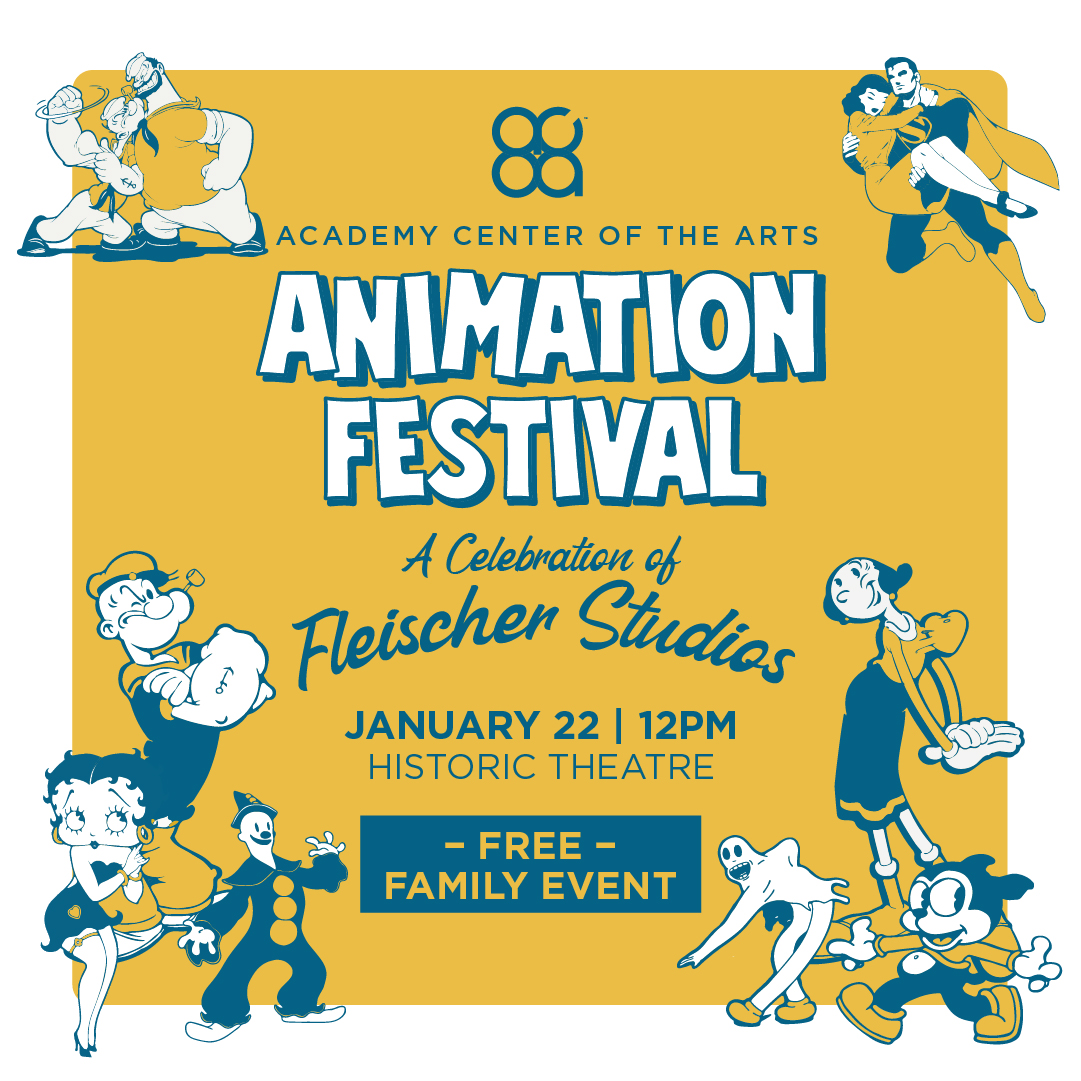 On a random day in 1921, two dreamers with a shared love of animation rented a New York City basement apartment. It was there, that brothers Max and Dave Fleischer created and began Out of the Inkwell Studios.

Eight years later in 1929, Out of the Inkwell Studios transformed into a much more popular name and company, Fleischer Studios. Serving as one of the most beloved American animation studios to ever exist, Fleischer Studios is home to some of the most iconic cartoons and cartoon characters: including the likes of Popeye the Sailor, Superman, Betty Boop and so many others. In 2022, Fleischer Studios is commemorating 100 years of the stories and personalities that have leapt off the pages of flip books and into the hearts of so many over the course of a century.

To celebrate the 100th anniversary of Fleischer Studios, the Academy Center of the Arts is hosting their first ever FREE Academy Animation Festival! Beginning at 12:00 PM on January 22nd, 2022 in the Historic Academy Theatre, come out and watch the films that continue to play on the big screen even after all of these years.

Superman vs the Mechanical Monster

“The Animation Festival is an event that focuses on animated classics that brings generations of people together and is fun for all ages,” says Michelline Hall, Academy Director of Programs. “This year is the 100 year anniversary of Fleischer Animation, so it is fitting that we’re celebrating Max Fleischer and his family run studio!”

The lobby of the Historic Theatre will open to patrons at noon, where all will begin their fun day filled with various Fleischer themed activities, including: photo opportunities with Popeye and Jessica Rabbit, various art projects, cool concessions, classic merchandise and so much more!

A mini-documentary on the creation of 1930’s Popeye cartoons will also begin playing in the lobby at noon, where audience members will learn of the creation behind one of the most classic Fleischer characters as well as learn all about the cutting edge technology from that time period.

“We will also have ‘Cuphead’ available to play, which is a video game based on the Fleischer animation style!” continues Michelline Hall.

At 1:00 PM, patrons will make their way to their plush red seats in the Historic Academy Theatre, where the showings of four classic Fleischer films will begin. There will be a 15-minute intermission directly before Who Framed Roger Rabbit.

Patrons will also get the rare chance of hearing directly from Jane Fleischer and Frank Gladstone, two beloved professionals within the animation industry. Listen and maybe even take some notes as Fleischer and Gladstone discuss the foundation of the well-known Fleischer style of animation as well as how it helped impact the type of cartoons and world of media that we still enjoy today.

Fleischer Studios reminds cartoon lovers and film admirers alike that no matter how long ago a movie was released, the story can last forever, for any and all ages. The creation and duration of the acclaimed Fleischer animation studios does just that, aides in the formation of stories for millions across the globe – whether it be in their past, present, or even their future.

These memories have and will continue to be passed down from generation to generation, and the Academy would love to host you as you start your own story associated with the Fleischer films, as we bring the big screen to the walls of our theatre.

“The true cartoon is a great art in its own right.”

—Max Fleischer, in a letter to Shamus Culhane, recalled in “Talking Animals And Other People”.