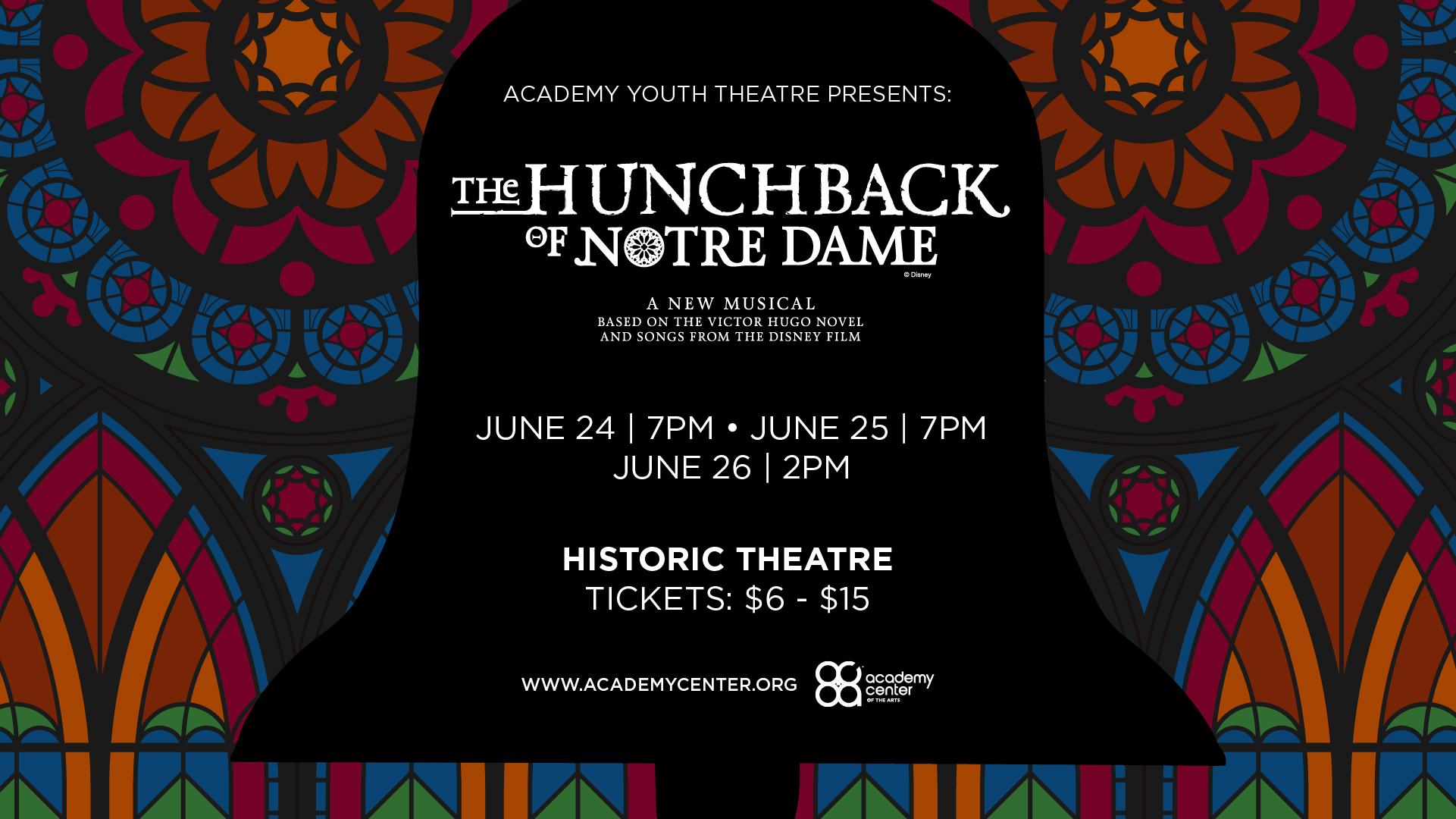 The bells are ringing and Academy Youth Theatre is singing! Opening on June 24, 2022, and going until June 26, join AYT for their take on the classic tale of The Hunchback of Notre Dame on the Historic Academy Theatre stage!

This production will tell the timeless story of Quasimodo, the hunched-back bell-ringer who longs to be “out there”, and observes all of Paris reveling in the Feast of Fools. Held captive by his devious caretaker, the archdeacon Dom Claude Frollo, Quasimodo escapes for the day and joins the boisterous crowd, only to be treated cruelly by all but the beautiful Romani woman, Esmeralda.

Quasimodo isn’t the only one captivated by Esmeralda’s free spirit, though – the handsome Captain Phoebus and Frollo are equally enthralled. As the three plead for her attention, Frollo embarks on a mission to destroy the Roma – and it’s up to Quasimodo to save them all.

The Hunchback of Notre Dame is a story that spans beyond time, that serves each period that it crosses over into in a different way, each one that much more unique than the last.

Looking beyond the bell tower of Notre Dame, past the thirty-three amazing cast members and stellar production set, you will find the three professional crew members that have ensured all of Academy Youth Theatre’s bells are up and ringing.

While Quasimodo gets by with help from his three gargoyle friends, Victor, Hugo, and Laverne, the Academy Youth Theatre kids have their very own companions in Brance Cornelius, Brooke Spencer, and Katy Wert – the three professionals who are working tirelessly behind the scenes to make this production special in its very own way.

Choreographer, Brance Cornelius, is responsible for creating the dances and musical staging guided by the story, the score, and the Director. “I’ve been working professionally for over twenty years,” he says.

“I’ve been an actor on the stage, a costumer, prop maker, handed out tickets and even directed,” he notes. “Now, I’m working back in my hometown, Lexington, creating theatre and working with students of all ages.”

Brance’s love of this story traces back to almost a decade ago when he performed with the Disney Cruise Line and got to sing “Out There” as Quasimodo in their production of The Golden Mickeys. “This is a beautiful score, much of which is in Latin, and it is a heartbreaking story,” he notes. “In some form or another, this timeless tale has lasted for almost two hundred years, as it was first published in 1831.”

Brooke Spencer is the Director of this production, which is the 12th show in which she has directed at the Academy over the last four years. She is responsible for all moving parts of the production, ensuring that every little thing comes together beautifully in the end.

“I’ve been very blessed to direct and stage-manage in many local theaters over the years,” she says, “this is one of my favorite shows and I’m so excited that Academy Youth Theater gets to bring this show to life!”

When Brooke is not directing, she is the Theatre teacher at Linkhorne Middle School. “This show is a massive production full of incredible music,” she notes, “I think this production will stretch our students in new and wonderful ways. I’m so excited to share this story of hope with our community!”

“What makes this show so special is the MUSIC!” says Katy. “I’m not just biased, this score is incredibly intricate and the choir adds a lot to it.” This is also Katy’s second time directing The Hunchback of Notre Dame, the first having been a 2016 production with Alluvion Stage Company.

These three hardworking professionals are individuals who have shown commitment and creativity in many ways. They continuously remind everyone involved, be it on stage or in the audience, the important role that having a strong support system plays in every single production.

With a sweeping score and powerful story, The Hunchback of Notre Dame became an instant classic when the tale was first told and continues to be impactful even still today, where thirty-three gleeful cast members will bring it to life on stage this summer.

When they do, don’t forget to thank the three gargoyle professionals behind the scenes, who continue to shine even from beyond the bell tower.