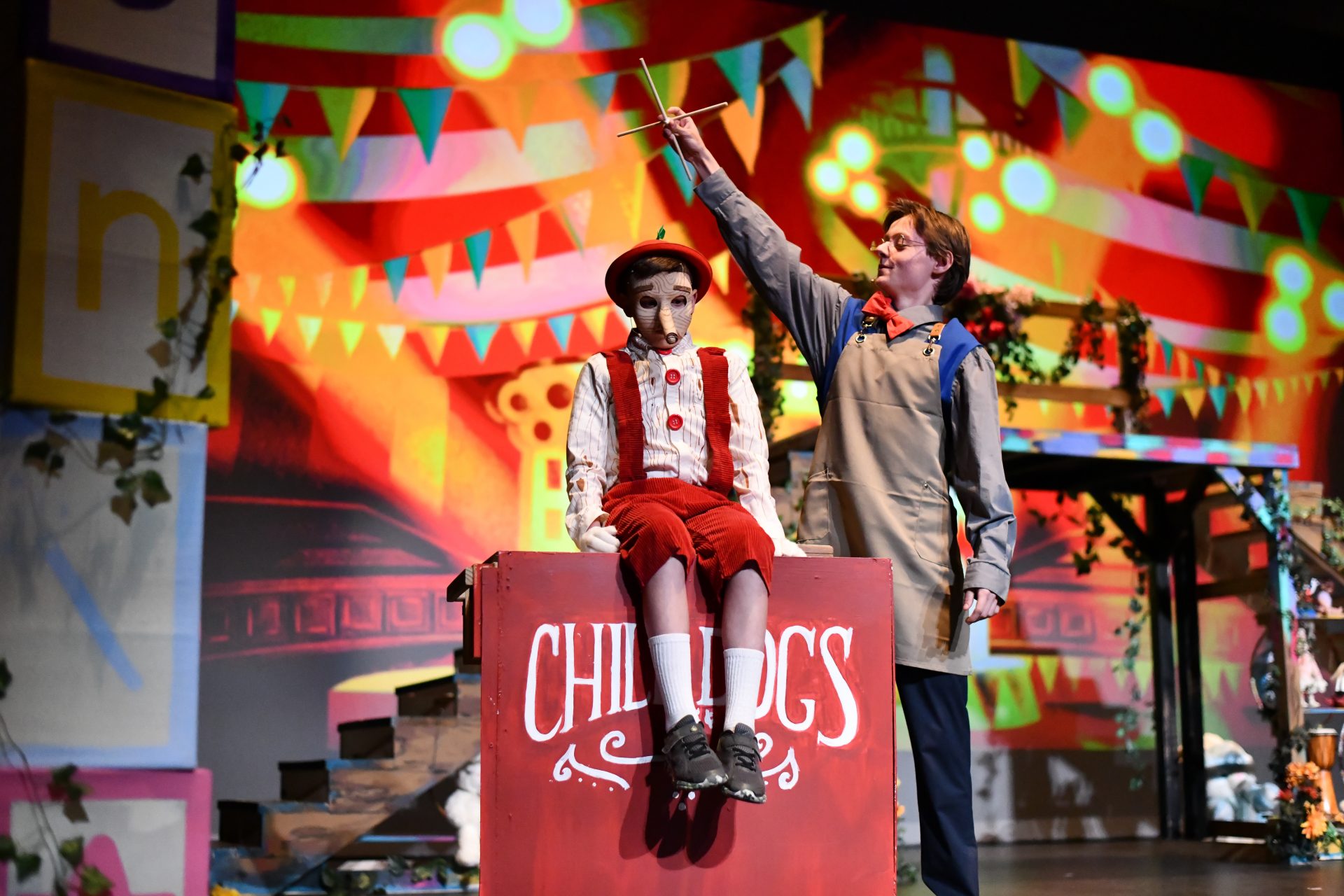 Academy Youth Theatre is BACK with their April production of My Son Pinnochio, JR!. The classic tale of Geppetto the toymaker and his little wooden puppet was given new life on the Historic Academy Theatre stage. The show opened Saturday, April 16, 2022 at 2 PM and closed on the same day at 7 PM.

This new musical retells the classic Disney story from Geppetto’s perspective, featuring the beloved classic songs, “When You Wish Upon a Star” and “I’ve Got No Strings,” alongside a host of new songs by Oscar winner and Grammy Award winner, Stephen Schwartz.

About the Show: The Blue Fairy, Stromboli, and a lively cast of characters join Geppetto on his journey beyond the toyshop to discover the meaning of family. When the Blue Fairy grants Geppetto’s wish to bring his beloved puppet to life, the new father quickly learns that being a parent is full of challenges. He struggles to make his son “the perfect boy,” only to lose him to a gang of Roustabouts.

It is only when faced with the thought of never seeing Pinocchio again that Geppetto truly learns the joys of being a father and loving his child unconditionally. Disney’s My Son Pinocchio JR. is filled with a magical mix of unique roles for all types of performers — from blue Fairies to Roustabouts and, of course, Geppetto and Pinnochio.

You might be wondering, so what? What’s so special about this particular production of My Son Pinnochio, JR, what sets it apart?

To start, the 32 children participating, aged eight to fourteen years old, come from various schools in the surrounding Lynchburg area. These include Lynchburg City Schools, Forest, Amherst, and even homeschooled students.

Auditions were held on Monday, April 4, 2022, but it wasn’t until a week later on Monday, April 11th, that the cast and crew of the show actually began rehearsing. Yes, you’re doing that math correctly! This means that those thirty-two kids and a number of crew members had not one month, not one week, but FIVE weekdays to pull together an hour-long show with acting, singing, and dancing.

These thirty-two kids truly put so much passion into their craft, spending the entirety of their spring breaks off of school at the Academy every day from 9:30 AM until 4:00 PM. The staff and crew got a glimpse into these children’s lives and further understood them as who they are, even in such a short amount of time.

They came together melodically to successfully tell the story of Pinocchio and Geppetto, one that goes further than the curtain, even beyond the stage and out of the theatre doors.

“It really is a story about Geppetto coming to terms with who his son is and learning to love him wholly,” says Education Manager, Kelli Johnson. “It’s about family relationships, accepting your children for their faults and their strengths.”

Director, Josh Carter, was the puppet master pulling the strings behind the whole operation. With his talent, a team of ten crew members, and the motivation of the kids – the show came together perfectly.

“These kids are so well-behaved,” says Josh, “I love working with them. There’s just a certain type of energy that a kid can bring to a role!”

After the show, Josh will continue in his journey of being a full-time actor at Colonial Williamsburg. “This experience will be the first of many steps into a full-time creative career,” he states.

Missed the show? No worries – Academy Youth Theatre is not going away anytime soon. Get ready for a summer season full of joy, song, and dance – get involved below!

This camp is for theatre lovers! High School students will learn and perform The Hunchback of Notre Dame during this 4 week long summer camp. Everyone who registers will have a role but there will be auditions for specific parts. This camp will be rehearsing and performing in our Historic Theatre.

A sweeping score and powerful story make The Hunchback of Notre Dame an instant classic. Audiences will be swept away by the magic of this truly unforgettable musical.

Middle School students will learn and perform The Little Mermaid, JR during this spring break camp. Everyone who registers will have a role but there will be auditions for specific parts. This camp will be rehearsing and performing in our Historic Theatre.